Just FYI, we'll have at least one, and possibly both, of our big screens tuned to the election results on Tuesday night (no World Series game or football, so there's minimal competition from sports). Come by if you're so inclined, and drink away what is likely to be a relatively sorrowful evening with our plentiful $3 pints.
Posted by J-C. G. Rauschenberg at 5:53 PM No comments:

Join Mimsy's third show for a set of improvised storytelling, followed by the debut of the "Mome Rath": three stories on the same theme, depression, braided together in the telling. Prepare to be outgrabed.

and special guest Bridget O'Neill!
Bridget is a recovering Photographer turned Writer and Performer.
Posted by J-C. G. Rauschenberg at 3:40 PM No comments:

What do Albert Einstein, Joan of Arc, and Amelia Earhart have in common? In almost every aspect of their lives, they were close to average. Almost every aspect. Join The Story Collider for six stories about math, statistics, and diverging from the mean, 8 PM November 17 at Pacific Standard. The Story Collider brings together animators, researchers, musicians, and other disreputable types to tell us personal stories about the times when, for good or ill, science happened.

http://facebook.com/thestorycollider
Posted by J-C. G. Rauschenberg at 9:15 PM No comments:

For the first time ever in our bar's history, we've managed to get a keg of Founders' highly sought after Breakfast Stout, which is one of the defining coffee/chocolate stouts in existence. Come in soon while supplies last. Description below:

Founders Breakfast Stout (Grand Rapids, MI; $6/12 oz). This very rare seasonal is the coffee lover's consummate beer. Brewed with an abundance of flaked oats, bitter and imported chocolates, and Sumatra and Kona coffee, it has an intense fresh roasted java nose topped with a cinnamon-colored head. 8.3% ABV.
And we'd also like to remind you we'll be rocking local upstart brewery Greenport Harbor's Leaf Pile pumpkin beer through Halloween and a bit beyond. Time Out just gave it a nice writeup, mentioning us:
http://newyork.timeout.com/eat-drink/bars/437061/the-season%E2%80%99s-best-beers

On marathon day, Sunday, November 7, we'll be opening early, at 9 am, to host people who want to watch the marathon, which runs right by our bar. You can watch the leaders and the pack pass by out of our big windows. We'll have a barbecue station outside as we usually do. And, finally, we'll have our Marathon Marys for for $7 per pint glass of goodness. The marathon is becoming a Pacific Standard tradition, and should be plenty of fun again this year.
Posted by J-C. G. Rauschenberg at 7:00 PM No comments:

The World Series at Pacific Standard.

If you haven't tried Ninkasi yet, get here with all haste. Total Domination is one of the best beers in existence, and we're thrilled to have it back.
Ninkasi Total Domination IPA (Eugene, OR; $11/22 oz).  Ninkasi is an amazing but relatively unknown Northwestern brewery.  This IPA is hugely hoppy, with a citrus smell and taste.  6.7%.
Posted by J-C. G. Rauschenberg at 8:50 PM No comments:


Rachel Rose (http://www.rachelrose.ca) is a writer whose work has appeared in various journals in Canada, the U.S., New Zealand and Japan, including Poetry, The Malahat Review, and The Best American Poetry, as well as in several anthologies, including Uncharted Lines: Poems from the Journal of the American Medical Association and Between Interruptions: 30 Women Tell the Truth About Motherhood. Her first book, Giving My Body to Science, (McGill/Queen’s University Press) was a finalist for The Gerald Lampert Award, The Pat Lowther Award, and the Grand Prix du Livre de Montreal, and won the Quebec Writers’ Federation A.M. Klein Award. Her second book, Notes on Arrival and Departure, was published by McClelland & Stewart (Random House Canada). She is the poetry and lyric prose mentor at SFU’s The Writer’s Studio and the founder of the “Cross-Border Pollination” reading series.
Jericho Brown worked as the speechwriter for the Mayor of New Orleans before receiving his PhD in Creative Writing and Literature from the University of Houston. He also holds an MFA from the University of New Orleans and a BA from Dillard University. The recipient of the Whiting Writers Award, the Bunting Fellowship from the Radcliffe Institute at Harvard University, and two travel fellowships to the Krakow Poetry Seminar in Poland, Brown teaches creative writing as an Assistant Professor of English at the University of San Diego.  His poems have appeared in The Iowa Review, jubilat, New England Review, Oxford American, and several other journals and anthologies.  His first book, PLEASE (New Issues), won the 2009 American Book Award.
Hossannah Asuncion grew up near the 710 and 105 in L.A. She currently lives near an F/G in Brooklyn. She is Kundiman fellow and received a 2010 PSA Chapbook National Fellowship. She tumbles at notarie.tumblr.com.
Posted by J-C. G. Rauschenberg at 7:43 PM No comments:

We've been meaning to blog about some of the amazing stuff on our taps these days. To wit:

--Firestone Walker, a fantastic Southern California brewery, is finally on draft in New York City, and we've got their Union Jack IPA on tap. This piney West Coast wonder won the gold in the most competitive category at the 2009 Great American Beer Festival, the American-Style IPA category.

--For the first time ever, Full Sail, a lovely Oregon microbrewery, is in New York City on draft. We've got their classic northwestern amber ale on tap right now. Full Sail Amber has brought home twelve medals from the World Beer Championships and one gold from the Great American Beer Festival.

--Barrier Brewing, a one-man operation on Long Island that just started up last year, is now delivering limited quantities of kegs to New York City. We just got their awesome Pale Ale, which packs a lot of pungent punch for a relatively low-alcohol pale. If the beer isn't enough to make you feel warm and fuzzy, you can feel warm and fuzzy for supporting a tiny new NYC-area brewery.

--Bear Republic's Ryevalry is here! Ryevalry is a brand-new and limited-release double IPA, brewed with large quantities of American hops and fermented with a Belgian ale yeast to create a bitter, hoppy, and spicy ale.

--We just got some new firkins that made their way across the Atlantic from the home of cask ale, England. Right now we have Ridgeway Bad King John, an English stout with great roasted malt aroma and taste. Ridgeway is one of the most talked-about English breweries, and cask is the way to drink their beer.

In sum, now is a great time to come by; it's one of the best tap selections we've ever had, if we do say so ourselves.
Posted by J-C. G. Rauschenberg at 5:09 PM 1 comment:

The following is a transcript of a conversation between one of the producers and one of the storytellers, earlier today on Facebook:

P: Can't remember if I booked you for this month or next month, and facebook is not letting me access my messages. This month is the 26th and the theme is misunderstandings. Can you do it?

S:i could be lying - but, I am not lying, yes, you did -- but I thought Cyndi said it was "monsters" - are y...ou sure its misunderstandings? Which is fine by me - great theme. do you need my name again?

Bathing in the professionalism that is this production this month will be:

Tracy "That's Not Mine, Officer" Rowland
Jim "Oh, When Are You Due?" O'Grady
Nelson "I Had The Money Here Somewhere" Lugo
Michelle "I Was Supposed To Declare That?" Carlo
Johanna "I Can Check Myself Out At Anytime" Clearfield
Rachel "I Totally Remember That Conversation" Khona
and
Brad "That's What Communicable Means?" Lawrence

with your host, Cyndi "I Thought The Wedding Was A Play Rehearsal" Freeman

And you, if you are the fabulous Mystery Guest drawn from the hat.
Posted by J-C. G. Rauschenberg at 10:43 PM No comments:


Kathleen Graber's second collection, The Eternal City, is a finalist for the 2010 National Book Award.  She is an assistant professor of English in the Creative Writing Program at Virginia Commonwealth University.  She has recently been a Hodder Fellow in Poetry at Princeton University and an Amy Lowell Travelling Scholar.  She is the recipient of fellowships from The New Jersey State Council on the Arts and The Rona Jaffe Foundation.  Her poems have appeared recently in AGNI, The Kenyon Review, and The New Yorker.
Colin Cheney’s debut collection of poems, Here Be Monsters (University of Georgia, 2010), was selected for the National Poetry Series. His poems have appeared in American Poetry Review, Poetry, Ploughshares, Kenyon Review, Notre Dame Review, Crazyhorse, and Gulf Coast. In 2006, he received a Ruth Lilly Fellowship from the Poetry Foundation, and his poem, “Lord God Bird,” received a 2010 Pushcart Prize. He lives in Bangkok, Thailand.
Anthony Carelli was born and raised in Poynette, Wisconsin—a no-stoplight village that smells periodically of sauerkraut.  He attended University of Wisconsin-Madison and New York University.  Currently Anthony works at a savory pie shop in Brooklyn, NY.  He has had poems published in a few magazines including Columbia, AGNI, and The New Yorker.  His first book, Carnations, will be published by Princeton University Press in spring of 2011.
Posted by J-C. G. Rauschenberg at 3:14 AM No comments:

One in our occasional series

of Cute Things That Happen at Our Bar: 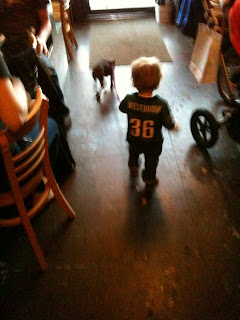 Join Mimsy's second show for a set of improvised storytelling, followed by the debut of "Same-line Storytelling": four stories, all centered around the same line.

Screening of the Goonies for charity on October 19!

At 7 pm on the 19th, we'll be doing another Silly Spooky Movie Night and showing the Goonies in the back room in order to benefit the Michael J. Fox Foundation for Parkinson's Research. There will be numerous tasty baked goods for sale back there too, all proceeds from that tastiness being donated to the foundation. Not to mention that we'll do $1 off drinks during the movie for charity folks, and a couple $3 pints all night, as we always do on Tuesdays. 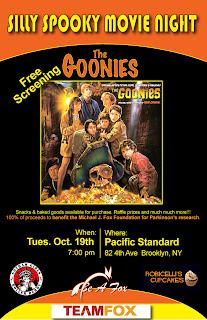 Gravity is inescapable. From scaling a mountain to forming galaxies to watching a family heirloom shatter on the ground, it is a central aspect of all of our lives, but we routinely take it for granted. And just when you're forced to step back and think about it, it turns out you were facing away from the edge of a cliff.

The Story Collider brings together animators, researchers, musicians, and other disreputable types to tell us personal stories about the times when, for good or ill, science happened. Join us for five tales of Gravity, 8 PM October 20 at Pacific Standard. No cover, no drink minimum.