Starting at 7 pm on Thursday the 14th, we'll have an impressive selection of beers that have made their way here all the way from the OC:

The Bruery 2 Turtle Doves (Placentia, CA; $7/12 oz). 2 Turtle Doves is the second in The Bruery's 12 Days/Years of Christmas series. The beer is based on "turtle" candy, with cocoa nibs, toasted pecans, caramelized sugar, and a lot of caramel malts. It's somewhere between a Belgian-style dark strong ale and an imperial porter. 12.0% ABV.

The Bruery Hottenroth (Placentia, CA; $6/12 oz). This tart German-style Berliner Weisse is The Bruery's strictly authentic version of a nearly extinct beer style. The brewers use lactobacillus and a hint of brettanomyces to sour this very unusual, low-gravity wheat beer. 3.1% ABV.

The Bruery Rugbrod (Placentia, CA; $6/12 oz). Brewed with three types of rye malt, this robust brown ale showcases the earthy, spicy character of dark whole-grain Danish rye ("rugbrod" means "rye bread" in Danish). It's complemented by bready, nutty barley malts and a hint of roast. Loosely based on the Scandinavian Christmas beer or "Julebryg" tradition, this beer is perfect for the colder weather of winter. 8.0% ABV.

These beers will all be $1 off all night, and we'll be giving out free tastings as well. Finally, we might be tossing around some free coasters, patches, and pint glasses, among other things. It's an event well worth your time.
Posted by J-C. G. Rauschenberg at 3:29 PM No comments:

we just got a bunch of Pliny the Elder bottles in. Whether you've never had it, or you've already experienced its glory, come ASAP to grab one. It is our personal favorite beer of all time and a verifiable religious experience. The details:

Russian River Pliny the Elder (Santa Rosa, CA; $12/16 oz). This double IPA, brewed in tribute to the namer of hops, is a GABF and World Beer Cup gold-medal winning hop explosion. 8.0%.
Posted by J-C. G. Rauschenberg at 5:01 PM No comments:

a keg of 2008 Goose Island Bourbon County Stout, which we cellared here for a year in order for it to gain even more complexity, is now on tap. The details:

Goose Island 2008 Bourbon County Stout (Chicago, IL; $9/8 oz). Goose Island has been releasing this highly anticipated beer once every year for the last sixteen years. The 2008 batch was aged for ten months in sixteen-year-old bourbon barrels. This adds intense charred oak, chocolate, vanilla, caramel, and smoke flavors. We picked up an extra keg of this last year and aged it here for 13 months. 13.0% ABV.
Posted by J-C. G. Rauschenberg at 6:23 PM 1 comment:

We just tapped the extremely rare collaboration between the brewers at Stone and the brewers at BrewDog, bashah. It's an incredibly unique beer, and only a few kegs were shipped out to the States from northeast Scotland, so you should get your keister here ASAP to try it. The details:

is coming on tap this Sunday, the 20th. We're just telling you blog and e-mail people about it. We've cellared the beer for a year, so it will be even more complex and glorious than it was last December. Make sure to stop by soon after we tap it, since it will certainly go fast.
Posted by J-C. G. Rauschenberg at 11:52 AM 1 comment:

is in effect at our bar again, after a brief sojourn in the South Slope. Come by to watch it flap away. Oh, it also talks to you inside your head and makes you do things. 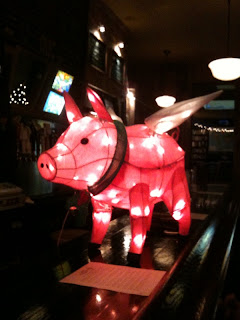 Alison Hawthorne Deming's most recent collection of poetry, ROPE, was published this autumn by Penguin Books. She is the author of three previous collections: SCIENCE AND OTHER POEMS (1994, winner of the Walt Whitman Award), THE MONARCHS: A POEM SEQUENCE (1997), and GENIUS LOCI (2005). She has also published several books of non-fiction, and her poems and essays have been widely published and anthologized, including in THE NORTON BOOK OF NATURE WRITING and THE BEST AMERICAN SCIENCE AND NATURE WRITING. She is currently professor in creative writing at the University of Arizona and lives in Tucson.

Joel Whitney's writing and commentary have appeared in The New Republic, The Village Voice, The San Francisco Chronicle, The Paris Review, The Nation, The Huffington Post, Agni, New York magazine—and on NPR. He's an "insider" on Tina Brown's Daily Beast where he comments on art and politics. Internationally his work has appeared in several languages, including in France's Courrier; his January interview with David Frum appeared in Esquire Russia. Joel has done more than 30 interview for the magazine, including Nobel Prize winners, members of Congress, heads of state, Oscar-nominated filmmakers, and Grammy-nominated singers, from a dozen countries. For his poetry, he was awarded a "Discovery"/The Nation Prize by the 92nd Street Y and The Nation. He lives in Brooklyn.

Ian Douglas is a writer, photographer and designer living in Brooklyn, New York. His poems have appeared in The New Yorker, the Literary Review, and other publications. You'll find his photographs in Time Out New York, Mouvement, and dance publications throughout the city. Occasionally you'll catch him (or one of his poems) yearning for the landscapes of his childhood and the West.
Posted by J-C. G. Rauschenberg at 5:09 PM No comments:

We just put up our Christmas tree

with a Sixpoint tap handle (and star) as the topper. We think it looks better than ever. Take a look: 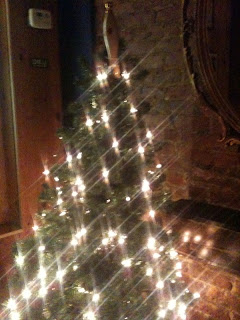 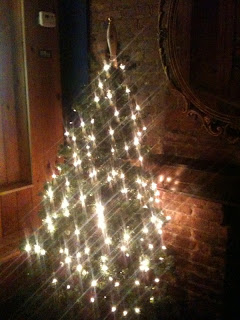 Cal will face off against Utah

in the Poinsettia Bowl at 8 pm on December 23. Come by to watch two excellent teams go at it, and to cheer Cal on to continue its streak of winning bowl games, and smacking those Utahans down. And, psst, we may even reward those of you who have
stuck with us all year with some giveaway items.
Posted by J-C. G. Rauschenberg at 5:40 PM No comments:

as we would be on a normal Friday, 12 pm-4 am. Come by if you're in town for a home-away-from-home experience, with sports and general shenaniganry. Oh, and we'll have an all-day-and-night happy hour--$1 off almost all drinks.
Posted by J-C. G. Rauschenberg at 7:04 PM No comments:

Just in case you weren't around for the finals, Toledo Despair defeated Gowanus Is for Lovers to win their first-ever title. Congratulations to them--a fancy party is theirs (plus Gowanus Is for Lovers gets a pretty fancy party too). See you guys around at our Weird and Big-Money quiz nights the next couple weeks.
Posted by J-C. G. Rauschenberg at 7:47 PM No comments:

As we did last year, during the months of December and January, we'll be staging an Iron Santa Challenge to encourage people to try our excellent selection of dark and winter seasonal beers. The challenge: drink a 16-ounce pint (or 12-ounce pint, depending on how we're serving a given beer) of six different winter beers in one day/night, and win a free Pacific Standard t-shirt (we have new varieties this year) and everlasting glory. The actual beers will change with our rotating tap selections, but will generally include beers like the Sierra Harvest/Celebration, Goose Island Bourbon County, Young's Chocolate Stout, and so on. Starting tonight, December 1, ask your bartender if you're interested in taking the challenge, and they'll provide you with a checklist of beers to drink over the course of an evening. Oh, and pace yourself. We don't want any messes.
Posted by J-C. G. Rauschenberg at 3:14 AM 2 comments:

including the debut of the brand-new Life & Limb, a collaboration between Sam from Dogfish Head and Ken from Sierra Nevada, the Pacific Standard debut of Southern Tier's excellent Phin & Matt's Extraordinary Ale, a very hard-to-get keg of Stone, and a rare cellared keg of Ommegang Obamagang (shh!). The details:

Ommegang Obamagang Inauguration Ale (Cooperstown, NY; $7/12 oz). This celebratory ale is a cross between a porter and a stout, with a bit of Belgian Kriek yeast and a touch of chocolate blended in, and an underlying cherry fruitiness. Ommegang will donate a percentage of sales to charities in the respective cities where the beer is sold. 6.7% ABV.

Sierra Nevada Life & Limb (Chico, CA; $6/12 oz). A much-anticipated collaboration between Dogfish Head and Sierra Nevada, Life & Limb is a strong beer brewed with pure maple syrup from the Calagione family farm in Massachusetts and estate barley from the Grossman farm in Chico. The beer has a blend of both breweries’ house yeast strains, and is naturally carbonated with birch syrup from Alaska. 10.0% ABV.

Stone Sublimely Self-Righteous (Vista, CA; $6/12 oz). This brew from Stone is a cross between an American strong ale and a Belgian dark ale. It’s chocolate brown in color, but has plenty of hops to take on the powerful roasted malts. A hint of honey sweetness balances out the finish. 8.7% ABV.
Posted by J-C. G. Rauschenberg at 4:53 PM No comments: