Here are the standings for our bar's NCAA tournament challenge, after this weekend's games:

For those interested, this all means that John R has clinched #1 in the bar challenge, and that Aaron has clinched #2. But bragging rights further down are up for grabs.

And, again, this is separate from our ESPN group. To get those standings, check espn.com.
Posted by J-C. G. Rauschenberg at 12:59 AM 2 comments:

For ages, there has been a great Midwestern brewery that hasn't been seen in New York City. Until now. It's rolling in, Cloverfield style. To wit:

Founder's Centennial IPA (Grand Rapids, MI; $6/16 oz). Get ready to bask in the glory of this ale's floral bouquet. Taste-wise, relish the citrus accents from the abundance of dry-hopping. Malty undertones shake hands with the hop character for a finish that isn't too bitter. 7.2% ABV.
Posted by J-C. G. Rauschenberg at 12:31 AM No comments:

Matthew Rohrer is the author of A PLATE OF CHICKEN (Ugly Duckling Presse, 2009), RISE UP (Wave Books, 2007) and A GREEN LIGHT (Verse Press, 2004), which was shortlisted for the 2005 Griffin Poetry Prize. He is also the author of SATELLITE (Verse Press, 2001), and co-author, with Joshua Beckman, of NICE HAT. THANKS. (Verse Press, 2002), and the audio CD, ADVENTURES WHILE PREACHING THE GOSPEL OF BEAUTY. He has appeared on NPR's "All Things Considered" and "The Next Big Thing." His first book, A HUMMOCK IN THE MALOOKAS was selected for the National Poetry Series by Mary Oliver in 1994. He lives in Brooklyn, New York, and teaches in the Creative Writing Program at NYU.

Geoffrey Nutter's most recent collection of poetry is CHRISTOPHER SUNSET, published this year by Wave Books. He is the author of two previous books of poems, WATER'S LEAVES & OTHER POEMS and SUMMER EVENING. His poems have appeared in journals and anthologies such as Carnet de Route, Verse, Denver Quarterly, Chicago Review, Fence, Xantippe, Best American Poetry 1997, and Iowa Anthology of New American Poetry. He is the recipient of an Academy of American Poets prize.

Graeme Bezanson is a founding editor of coldfrontmag.com, an online journal of essays and poetry reviews. His poems have recently appeared in, or are forthcoming from, Washington Square, The Laurel Review, EOAGH, and The Agriculture Reader. He lives and works in Manhattan.
Posted by J-C. G. Rauschenberg at 8:03 PM No comments:

Here are the standings for our bar's NCAA tournament challenge, after today's games:

And, again, this is separate from our ESPN group. To get those standings, check espn.com.
Posted by J-C. G. Rauschenberg at 12:52 AM No comments:

=====
mimsy is a storytelling show in brooklyn.

each show is centered around a theme, with storytellers free to explore organic facets of that theme. the show is live and stories are presented without notes. all stories for mimsy are culled from autobiographical experience.
Posted by J-C. G. Rauschenberg at 12:44 AM No comments:

Here are the standings for our bar's NCAA tournament challenge, after the first weekend:

And, again, this is separate from our ESPN group. To get those standings, check espn.com.
Posted by J-C. G. Rauschenberg at 5:32 PM 1 comment:

We'll have happy hour from 2-4 pm for those watching the movie in back. And don't worry--we'll still have any NCAA Tournament action in the front. 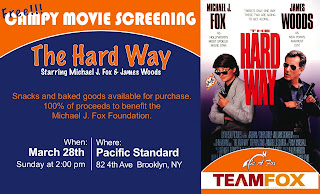 Here are the standings for our bar's NCAA tournament challenge, after Day 3:

And, again, this is separate from our ESPN group. To get those standings, check espn.com.
Posted by J-C. G. Rauschenberg at 1:28 PM No comments:

Here are the standings for our bar's NCAA tournament challenge, after Day 2:

And, again, this is separate from our ESPN group. To get those standings, check espn.com.
Posted by J-C. G. Rauschenberg at 4:55 PM No comments:

against Duke, at 5:15 pm or so. Any self-respecting Cal fan should be here. Go Bears!
Posted by J-C. G. Rauschenberg at 4:14 PM No comments:

Standings after round 1 of our challenge.

Here are the standings for our bar's NCAA tournament challenge, after Day 1:

And, again, this is separate from our ESPN group. To get those standings, check espn.com.
Posted by J-C. G. Rauschenberg at 12:35 AM No comments:

If you're doing the ESPN Tournament Challenge contest thingy, join Pacific Standard's group, in addition to any others you may be members of. We shall vie for ultimate Pacific Standard bragging rights. Plus we'll probably give you a free beer or two if you win. Go here to sign up:

Our group name is Pacific Standard, and the password is "gobears". Oh, and to avoid any confusion, this has nothing to do with the bar's own tournament pool, which you should definitely ask your bartender about.
Posted by J-C. G. Rauschenberg at 7:34 PM No comments:

We'll be opening early, at noon, on Thursday to show all the NCAA Tournament games possible. (We always open at noon Friday-Sunday.) We have the package, and can show two different games at a time on our two glorious and large projection screens. It'll be first-come, first-served, as usual--just ask your bartender if there's a game you're interested in.

In related news, we'll be doing a Pacific Standard bracket challenge. If you want to be involved and possibly gain glorious rewards, ask your bartender for details.

Cal will play Louisville around 10 pm on Friday night, following the conclusion of the Duke game. If we win, we'll likely face Duke on Sunday. Keep checking our blog/Facebook/Twitter feeds for updates. Go Bears!
Posted by J-C. G. Rauschenberg at 4:33 PM No comments:

will be the usual mellow, non-vomity affair here at Pacific Standard, if you're interested in getting away from the crowds and craziness and just drinking some good beer. We do have one special: Sly Fox's Seamus Irish Red Ale, in honor of the Irish, will be $4 all night. Come, hide with us.
Posted by J-C. G. Rauschenberg at 4:24 PM 1 comment:

We're getting written up everywhere.

Henri Cole's most recent collection of poetry, PIERCE THE SKIN, was published this year by Farrar Straus and Giroux. The recipient of many awards, he is the author six other collections of poetry, including BLACKBIRD AND WOLF (FSG, 2007), and MIDDLE EARTH (FSG, 2003) which was a Pulitzer Prize finalist. Born in Fukuoka, Japan, and raised in Virginia, he currently lives in Boston and teaches at Ohio State University in Columbus.

Elizabeth Arnold's new volume of poetry, EFFACEMENT, was released by Flood Editions in 2010. She was recently awarded the Amy Lowell Poetry Traveling Fellowship. She has published two previous books of poems, THE REEF (University of Chicago Press, 1999) and CIVILIZATION (Flood Editions, 2006). She teaches in the MFA program at the University of Maryland.

Alison D. Moncrief lives and writes in Burlington, Vermont. Her poems have appeared in The Denver Quarterly and The Paris Review.
Posted by J-C. G. Rauschenberg at 3:54 PM No comments:

As we've said, we'll be showing all the A's games in 2010, plus any other baseball games you come in and ask for, the fact that we have only two screens (but glorious and large screens) permitting. Opening Day for the A's will be April 5. Come in, mention that you're here to watch the A's game--it's at 10 pm--and get happy hour ($1 off all drinks) all night. You can also take advantage of our newly introduced special: $3 Sierra Nevada pints during the first A's game, and any Wednesday games to follow. To wit:

--For all Wednesday A's games we'll be discounting Sierra Nevada by $2 if you mention that you're here for the game. It ain't Dollar Wednesdays, but we do our best. $3 beer in NYC is a Coliseum-style deal, we think.
--If you come in on any A's game day and mention you're here for an A's game, we'll discount any beer you drink by $1. Because we like you.
Posted by J-C. G. Rauschenberg at 4:50 AM 1 comment:

And a few more 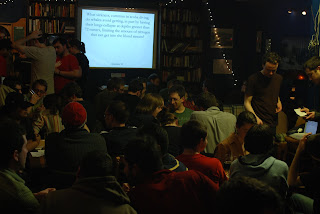 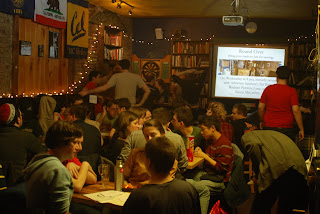 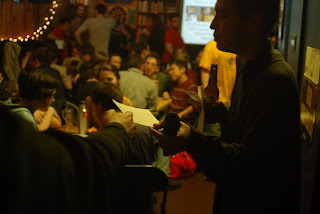 Some nice pictures of pub quiz

that our friend Mike H. took: 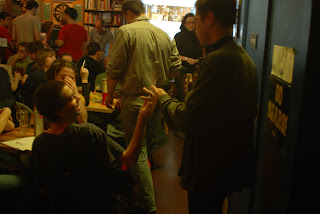 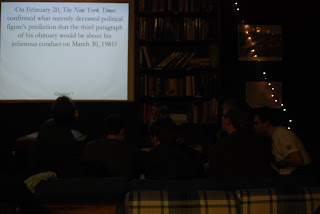 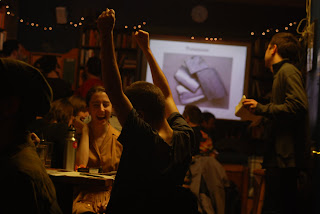 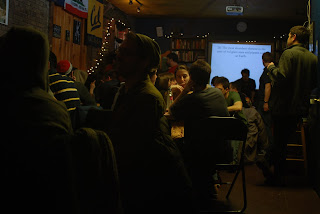 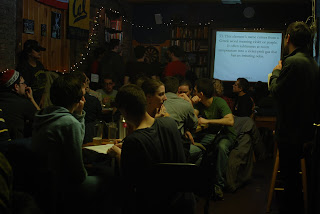