In honor of our friends at Get Real (http://getrealpresents.com/), who are holding their Beer Week September 20-27, and in honor of the cause of and solution to all life's problems, we are doing a special pub quiz on the 22nd at 8 pm, themed around beer, breweries, and the fine men and women who have enjoyed this age-old beverage. Each of the four rounds will be beer-related, but don't worry, beer newbies--some of them will only tangentially relate to beer (beer in pop culture, etc.) At the end of the quiz, we'll have a beer tasting round, but will also have four additional questions at the end of each other round where you'll be asked to sample different hop varieties and guess which they are from a multiple-choice list. Prizes will include special bottled beers from our cellars and Pacific Standard beer cozies, as well as our usual free drinks! This event is essential for anyone who calls themselves a beer expert. If you don't make it, you might as well start drinking Heineken. 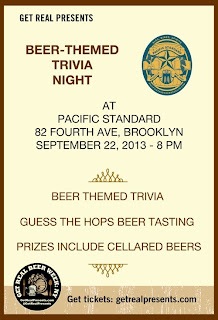 Come join us as the Great Weather crew journeys back across the East River to Pacific Standard in Park Slope Brooklyn!! We've got a killer lineup to showcase our latest anthology, The Understanding between Foxes and Light!! Find us in the kick back comfortable back room with the cozy sofas!

TODD ANDERSON has been published in journals including Muzzle, The Legendary, and The Manuscript. In addition to his writing, Todd is the producer of the Poetry Observed video series. Website

JOHN CLINTON was born and raised in Brooklyn. He attended the School of Visual Arts where he studied filmmaking. John currently resides in Staten Island.

ABBY COLEMAN is a poet and artist living in Brooklyn. She is an MFA candidate in poetry at The New School and a teacher for Writopia Lab NYC—a national community of young writers ages eight to eighteen.

GABRIEL DON is undertaking her MFA in Fiction and Nonfiction at The New School, where she also works as the chapbook and reading series coordinator. Her work has appeared in The Sydney Morning Herald, Short Fast and Deadly, A Place We Know Well, The Brooklyn Rail, and The Saudade Review. She is a PEN prison mentor, part of the editorial staff at LIT, and is also the Poetry Editor of Night Mag.

THOMAS HENRY is a twenty-something South Brooklynite who is deeply affected by everything. The things in life that seem obvious to everyone are completely lost on him. He is incapable of not writing and must be stopped.

GIUSEPPE INFANTE is a poet, writer, and life observer. While attending the Long Island University MFA program for Creative Writing, he co-founded Overpass Books and was winner of the 2012 Esther Hyneman Graduate Award for Poetry. Giuseppe’s first collection of poetry, ways of dying naked in mexico city, was published by Overpass Books in 2012.

TED JONATHAN is a poet and short story writer. Born and raised in the Bronx, he now lives in New Jersey. His work may be found in many magazines and anthologies including great weather for MEDIA’s It’s Animal but Merciful. Translations of his poetry have appeared in Russian magazines. Spiked Libido, his first collection, was published by Neukeia Press. Ted’s most recent full-length collection of poems and short stories is Bones & Jokes (NYQ Books, 2009).

JEAN LEHRMAN is the author of the poetry chapbook If You Come Back I Won’t Have AIDS and the full-length collection Lazarus (Rogue Scholars Press, 2007). She grew up in New York City, likes dogs, cats, ferrets, and eats meat. She doesn’t like fire engines or the Patriot Act.

In addition to writing poetry, RICK MULLIN is also a painter. His epic poem Soutine, on the life of the artist Chaïm Soutine, was published in 2012 by Dos Madres Press. Rick is also the author ofthe book-length poem Huncke (Seven Towers Press, Dublin, 2010) and the chapbooks Aquinas Flinched (Modern Metrics/EXOT Books, 2008) and The Stones Jones Canzones (Finishing Line Press, 2013). His first full-length collection, Coelacanth, is forthcoming from Dos Madres Press.
Posted by J-C. G. Rauschenberg at 12:18 PM No comments:

Come by for free comedy tomorrow night at 7:30! Here's the information straight from the horse's mouth:

The show is summer themed--we'll be giving tips on how to have a great summer! We'll have a sunscreen demonstration, vacation tips, a recipe for a quick and easy summer salad, and a hot dog eating contest. Performers: