Starting next Saturday, we’ll have delicious, fresh-made Bloody Marys on Saturday and Sunday afternoons. Come by starting at noon for your hangover cure.
Posted by J-C. G. Rauschenberg at 11:03 PM No comments:

Everyone had a great time watching the U.S. upset Spain today. We'll open as usual at noon on Sunday, and will have the Confederations Cup final on both big screens starting at 2 pm. Come by for some good beer and excellent soccer.
Posted by J-C. G. Rauschenberg at 6:51 PM No comments:

We are now out

of that Gaius Plinius Secundus beer I mentioned last week. We'll see if we can get some more soon...
Posted by J-C. G. Rauschenberg at 12:18 AM No comments:

Come by our bar on Tuesday, June 30, from 9-10:30 pm, to meet the brewers of the new-to-New-York 21st Amendment brewery, who will be out from San Francisco. We'll even have a $3 special on their fine IPA all night, if mere human companionship isn't enough for you. Cool? Cool. We'll see you there.
Posted by J-C. G. Rauschenberg at 4:32 PM No comments:

Open early on Wednesday to show the Confederations Cup Semifinals.

The U.S. men's soccer team has improbably advanced to the Confederations Cup semifinals, and we're so excited that we'll open early, at 2:30 pm, on Wednesday to show their match against Spain. It'll be a tough one, but there'll be plenty of beer to assuage our sorrows or celebrate our upset. Skip work and come on by! It'll be happy hour the whole time.
Posted by J-C. G. Rauschenberg at 6:46 PM No comments:

to everyone who came to and read at Chin Music this season. It was awesome. We'll be taking a couple months off, and will return in the fall. See you then!
Posted by J-C. G. Rauschenberg at 12:32 AM No comments:

that we have about eight bottles of a California beer named in honor of Gaius Plinius Secundus, probably for just a few days. Stop by before the weekend is over to grab a 16-ounce dose of hoppy glory. It's $12 because it costs us so much to get it out here, but it's worth it.
Posted by J-C. G. Rauschenberg at 1:37 AM No comments:

Ballast Point, an award-winning San Diego brewery, has come to New York for the first time, and we've picked up a keg of their Calico Amber. The details:

Ballast Point Calico Amber Ale (San Diego, CA; $6/16 oz). Ballast Point is a great San Diego brewery that is all-new to New York. Though inspired by English ales, Calico Amber uses American Cascade and Centennial hops, which give a crisp bitterness to balance the malt and a floral aroma. Four different crystal malts give it toffee and caramel flavors, while a proprietary yeast provides a fruity background and a richness that rounds out this gold medal-winning ale. 5.0% ABV.
Posted by J-C. G. Rauschenberg at 1:56 PM No comments:

We're almost halfway done with the Thirtnight of Fury, and have had well over 30 different beers on tap now, which means that a few people have already completed the challenge, and many others are coming close. But for those of you who haven't started yet, or those who just haven't been able to spend much quality time here, we've decided to add a second, more modest award level. If you have just 15 different beers in June you’ll get $4 beer all night (and free stuff) on our July 9 Fortnight of Fury party. (Don't worry--those who drink 30 will still get the same $2 or $3 beers all night, plus an entry into the raffle for a fabulous $140 dinner for two at The Farm on Adderley and the $100 gift certificate to Bierkraft, among other things). So come in, get your sheet, and drink 15 beers over the next 16 days. It's not hard.
Posted by J-C. G. Rauschenberg at 2:49 PM No comments:

For the first time ever

21st Amendment, a great San Francisco brewery, is available in NYC, and we have one of the first kegs shipped. The details:

21st Amendment Brew Free or Die IPA (San Francisco, CA; $6/16 oz). This deep golden ale, dry-hopped in the fermenter with four types of hops, has an explosive citrus and piney aroma, with an assertive malt backbone to balance the bitterness. 7.2% ABV.
Posted by J-C. G. Rauschenberg at 4:52 AM No comments:

we won't be able to show the first part of the NBA Finals game this Sunday night because it's pub quiz playoffs at 8:30. Quiz will be over by the end of the third quarter, though, so anyone who (like us) doesn't see any point in watching NBA games before the fourth quarter is welcome to come by.
Posted by J-C. G. Rauschenberg at 3:35 AM No comments:

Sarah Manguso is the author of the memoir THE TWO KINDS OF DECAY, recently released in paperback by FSG. It was named an Editors' Choice by the New York Times Sunday Book Review and a Best Nonfiction Book of the Year by the San Francisco Chronicle. Her other books include the story collection HARD TO ADMIT AND HARDER TO ESCAPE (2007), included in McSweeney's 145 Stories in a Small Box, and the poetry collections SISTE VIATOR (2006) and THE CAPTAIN LANDS IN PARADISE (2002), which was named a Favorite Book of the Year by the Village Voice. In 2008 she received the Joseph Brodsky Rome Prize in Literature from the American Academy of Arts and Letters. Born and raised near Boston, she lives in Brooklyn.

Dan Albergotti’s collection of poems, THE BOATLOADS, was selected by Edward Hirsch as the winner of the 2007 A. Poulin, Jr. Poetry Prize from BOA Editions and published in April 2008. His poems have appeared in The Cincinnati Review, Mid-American Review, Shenandoah, The Southern Review, The Virginia Quarterly Review, and other journals. His chapbook, CHARON’S MANIFEST, won the 2005 Randall Jarrell/Harperprints Chapbook Competition. Former poetry editor of The Greensboro Review, he currently edits the online journal Waccamaw (www.waccamawjournal.com) and teaches creative writing and literature courses at Coastal Carolina University.

Blue Chevigny is a native New Yorker who writes a lot of her poems on long subway commutes. Her work has appeared in Hanging Loose and Salamander Jacket. She is also a social worker and radio producer for public radio. She and her sister have a podcast about movies: katyandbluegotothemovies.com.
Posted by J-C. G. Rauschenberg at 2:07 PM No comments:

We've just gotten a bunch of our very handsome and popular dark grey heather Pacific Standard logo t-shirts in a range of new sizes, so all of you differently-sized people have a shirt that will fit you perfectly waiting here, expectantly. They now come in everything from small to XXL, and fit both men and women; we're selling them for $18 a pop. (And we still have off-white shirts too.) Come by and purchase them with American dollars or Pacific Standard Frequent Drinker Yards.
Posted by J-C. G. Rauschenberg at 7:42 PM No comments:

We're not in the habit of putting European beers on tap, because we love our American craft brews, but once in a while something really special comes along. And this one is a German-Brooklyn hybrid:

Schneider Brooklyner Hopfen Weisse (Kelheim, Germany; $7/12 oz). This small-batch collaboration between brewmasters Hans-Peter Drexler of Schneider Weissbier and Garrett Oliver of Brooklyn Brewery is a pale weissbock, robustly dry hopped with the Hallertauer Saphir variety grown in the fields near the Schneider brewery. Hoppy, zesty and supremely refreshing, this beer is a delicious blend of Bavarian craftsmanship and American ingenuity. 8.2% ABV.

We should add, finally, that it tastes like pure manna from heaven. Come by and grab a glass before we run out.
Posted by J-C. G. Rauschenberg at 6:33 PM No comments:

1. We promise not to overwhelm you with cute Charlotte photos, but we can't resist on these two: 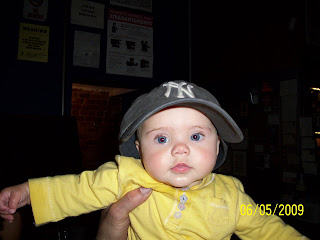 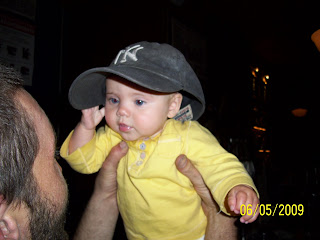 2. Some of you may know that our bar is occasionally visited by an odd creature, a talking lime with olives for eyes, a toothpick for arms, and little paper cut-out hands. His name is El Junipero and he is fearsome and prophetic: 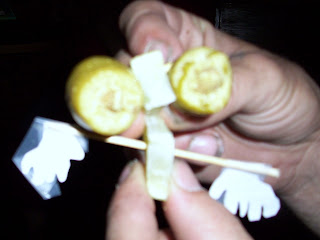 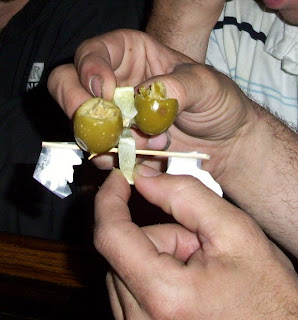 On Thursday, June 25, starting at 7 pm, we'll have an awesome Ithaca beer event, with some of their very impressive ales, including:

and perhaps one more beer, like Cascazilla or their 11th Anniversary. It depends on availability at the time; we'll keep you updated. Regardless, there will be drink specials, brewery staff, and giveaways (I think the Ithaca folks are bringing some cool glassware). So you should definitely come by (plus, you'll have the chance to add a bunch of new beers to your Thirtnight of Fury sheet).
Posted by J-C. G. Rauschenberg at 12:05 AM No comments:

A brand-new release from Boulder Beer is here, an anniversary ale that won't stick around for long. Also, the first India Brown Ale (!) we've ever had. Details:

Boulder Beer Flashback Anniversary Ale (Boulder, CO; $6/16 oz). This beer, brewed in honor of Boulder’s 30th anniversary, is an India Brown Ale, single-hopped with five separate additions of Cascade hops. Citrusy like an IPA but dark and roasty like a brown ale, Flashback is complex and unique. 6.9% ABV.
Posted by J-C. G. Rauschenberg at 12:28 AM No comments:

We finally went through each of the thousands of old cards in our basement, some of which you've seen adorn our tables and bathrooms, and picked out all the ones we want to keep. That leaves hundreds and hundreds of extra ones that we'd like to get rid of to save space, so if you're a collector, by all means come by, pick ones you like, and make us an offer; we'll sell em cheap. They're mostly 1970s and early 1980s baseball, hockey, football, and basketball cards, with some other random stuff thrown in there. Not too valuable and not in super-mint condition, but pretty and lots of fun.
Posted by J-C. G. Rauschenberg at 9:15 PM No comments:

Oh, and of course

we'll have the Belmont Stakes on Saturday, June 6, at 6:30 pm, and will concoct the usual spur-of-the-moment race drink special. Come by to see if Mine That Bird can get another Triple Crown victory. (Also, we reserve the right to give free drinks to people with excellent hats.)
Posted by J-C. G. Rauschenberg at 4:58 PM No comments: