was awesome. Here's one picture we took: 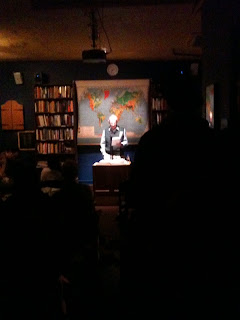 On marathon day, Sunday, November 1, we'll be opening early, at 9 am, to host people who want to watch the marathon, which runs right by our bar. You can watch the leaders and the pack (go Mike Romanos!) pass by out of our big windows and enjoy the fact that you're not running 26 miles, via beer. We'll also have a barbecue station on the sidewalk outside, so you can grab some cheap hot dogs and burgers, or bring meat/veggies of your own to grill. Finally, we'll have our usual Marathon Marys for for $7 per pint glass of goodness.
Posted by J-C. G. Rauschenberg at 6:04 PM No comments:

Please join us for our next evening of Chin Music @ Pacific Standard. On October 29th, we are thrilled to feature three excellent poets: Roddy Lumsden, Jynne Dilling Martin, and Farnoosh Fathi.

Roddy Lumsden’s poetry collections include YEAH, YEAH, YEAH (Bloodaxe, 1997), RODDY LUMSDEN IS DEAD (Wrecking Ball Press, 2001), MISCHIEF NIGHT: NEW & SELECTED POEMS (Bloodaxe, 2004), and THIRD WISH WASTED (Bloodaxe, 2009). Lumsden has worked as a freelance writer, editor, teacher, and writer of puzzles and quizzes for newspapers. He also composed a poem, “Bloom,” on the set of “Flowers for Kate”—a photo shoot of the model Kate Moss for V magazine. He was born in St. Andrews, Scotland, and lives in London.

Farnoosh Fathi recently received a Fulbright Fellowship to travel to Brazil and write poems. Her work has appeared or is forthcoming in Denver Quarterly, Fence and Boston Review. She currently lives in New York City.
Posted by J-C. G. Rauschenberg at 5:50 PM No comments:

Victor LaValle's second novel, the newly published BIG MACHINE, has given The Wall Street Journal and Mos Def something they can agree on (sort of: the former likened the book to Ralph Ellison and Thomas Pynchon, where latter name-checked Edgar Allen Poe and Gabriel Garcia Marquez). His previous book, The Ecstatic, was a finalist for the PEN/Faulkner Award. LaValle is also the author of a story collection, Slapboxing with Jesus. He has earned a Whiting Writers' Award and the key to the city of Jamaica, Queens.

Robert Lopez's second novel, the newly published KAMBY BOLONGO MEAN RIVER, is "disturbing and inspiring and at all times hypnotic," writes Bookslut. His previous novel, Part of the World, garnered numerous comparisons to Samuel Beckett. Lopez's fiction and poetry has appeared in Bomb, The Threepenny Review, and The Mississippi Review. He teaches at The New School.
Posted by J-C. G. Rauschenberg at 5:49 PM No comments:

but Dick's Brewing, a great Washington brewery, has just come out to New York City. We now have their flagship beer on tap:

Dick’s Brewing Dick Danger Ale (Centralia, WA; $6/16 oz). Dick’s Brewing’s flagship beer has a large percentage of black malts, giving it a dark brown color and a slightly roasted flavor. Magnum hops provide a backbone of bitterness, and large additions of Mt. Hood hops come through in the finish. The result is a drinkable dark ale which bridges the gap between pale and porter. 4.5% ABV.
Posted by J-C. G. Rauschenberg at 12:45 PM 2 comments:

If you're in New York for Thanksgiving

we'll be opening early, at 12 pm, to show the football games and celebrate the holiday. We'll also have an all-day-and-night happy hour ($1 off almost all drinks). So if you're in town and want to watch some football on our big screens and enjoy some Thanksgiving camaraderie on the cheap, come by anytime.
Posted by J-C. G. Rauschenberg at 5:33 PM No comments:

the birthplace of Mr. Rauschenberg:

Chin Music on October 22 at 7 pm with Phil Levine.

Philip Levine's new collection of poetry is NEWS OF THE WORLD,
published this autumn by Knopf. He is the author of sixteen
collections of poems and two books of essays. He has received many
awards for his poetry, including the National Book Award in 1980 for
ASHES and again in 1991 for WHAT WORK IS, and the Pulitzer Prize in
1995 for THE SIMPLE TRUTH. Mr. Levine divides his time between
Brooklyn, New York, and Fresno, California.

Steve Gehrke has published three books of poems, most recently
MICHELANGELO'S SEIZURE, which was selected for the National Poetry
Series. His poetry has earned him a grant from the National Endowment
for the Arts and a Pushcart Prize and has been published in numerous
journals. He holds degrees from Minnesota State University, University
of Texas at Austin, and the University of Missouri. He has previously
taught creative writing and literature courses at the University of
Missouri and Seton Hall University. He is currently Assistant
Professor in the English Department at Gettysburg College.

Jason Koo is the author of MAN ON EXTREMELY SMALL ISLAND, winner of
the 2008 De Novo Poetry Prize. The recipient of fellowships from the
National Endowment for the Arts and the Vermont Studio Center, he has
published his poetry and prose in numerous journals, including The
Yale Review, North American Review and The Missouri Review. He earned
his B.A. in English from Yale, his M.F.A. in creative writing from the
University of Houston and his Ph.D. in English and creative writing
from the University of Missouri-Columbia. He currently lives in New
York, where he teaches at NYU and Lehman College and serves as Poetry
Editor of Low Rent.
Posted by J-C. G. Rauschenberg at 5:55 PM 1 comment:

is now available here:
http://gobohd.com/shows/BeerNation/
Posted by J-C. G. Rauschenberg at 2:01 AM 1 comment:

These two super-rare beers are now on:

the official start time of the Beer Nation premiere party tomorrow is 7:30. And we'll have $3 Sweet Action pints all night. In other words, we're gonna kick a keg in about six hours. So come as early as you can. Check out the intro to Beer Nation at the following web location:

www.goboHD.com/BeerNation
Posted by J-C. G. Rauschenberg at 6:12 PM No comments: