For a while, we've been opening early, at noon, on Fridays to accommodate our ever-beleaguered teacher friends at the end of a long week of educating America's youth. We've decided to extend another privilege to teachers on Fridays: double-secret happy hour specials until 6 pm, with $2 off all drinks $5 and up. You just need to show some kind of teacher identification (like a card, or a bruise or scratch), and you're good to go. We'll see you around, and thanks for all the good work you do.
Posted by J-C. G. Rauschenberg at 8:42 PM 2 comments:

Please join us for our next evening of Chin Music, the Pacific Standard Poetry Reading Series. On December 4th, we are excited to present three fine poets: Quraysh Ali Lansana, Gregory Pardlo and Mytili Jagannathan. Our final reading of the 2008 Season, on December 11th, will feature Yusef Komunyakaa and Idra Novey. Series curated by Colin Cheney.

Located on Fourth Avenue in downtown Brooklyn, near the Atlantic/Pacific subway hub, Pacific Standard is a literary bar serving up eighteen microbrews on tap and cask (including both West Coast and local breweries), fine wines and liquors, and tasty snacks like chips and salsa, and meat and cheese plates.

Quraysh Ali Lansana is author of THEY SHALL RUN: HARRIET TUBMAN POEMS (Third World Press, 2004), SOUTHSIDE RAIN (Third World Press, 2000) and THE BIG WORLD, a children's book, (Addison-Wesley, 1999). He has edited and co-edited several anthologies, including AFRICAN AMERICAN LITERATURE READER (Glencoe/McGraw-Hill, 2001) and ROLE CALL: A GENERATIONAL ANTHOLOGY OF SOCIAL AND POLITICAL BLACK LITERATURE AND ART (Third World Press, 2002). He is Director of the Gwendolyn Brooks Center for Black Literature and Creative Writing at Chicago State University, where he is Associate Professor of English and Creative Writing.

Gregory Pardlo’s first book, TOTEM, won the APR/Honickman Prize in 2007, and was a finalist for the Essence Magazine Literary Award in poetry. He the recipient of a New York Foundation for the Arts Fellowship and a translation grant from the National Endowment for the Arts. He has received additional fellowships from the New York Times, the MacDowell Colony, and Cave Canem African American Poet’s Workshop. His poems, reviews and translations have appeared in American Poetry Review, Calalloo, Gulf Coast, Lyric, Painted Bride Quarterly, Ploughshares, Seneca Review, Volt, Black Renaissance/ Renaissance Noir, and on National Public Radio.

Mytili Jagannathan lives in Philadelphia, where she's been actively involved in the community arts work of the Asian Arts Initiative. She is the author of ACTS, a chapbook from Habenicht Press, and her poems have appeared in EOAGH, Rattapallax, Combo, Interlope, Mirage#4/Period[ical], Xcp: Cross-Cultural Poetics, and Fanzine. She is the recipient of an Emerging Artist grant from the Leeway Foundation and a Pew Fellowship in the Arts.
Posted by J-C. G. Rauschenberg at 5:00 PM No comments:

Save the date: Lagunitas event in late January.

In late January, Wednesday the 28th to be exact, the boys from Lagunitas (or, at least, a boy from Lagunitas) will be here with brand-new 2009 releases and other rare and interesting beers. Actual beers TBA, but rest assured it will be interesting. That is all.
Posted by J-C. G. Rauschenberg at 4:36 PM No comments:

As you may have heard, we're going to feature six unique, limited-edition, and seasonal Rogue beers on Tuesday, December 9. The close-to-final lineup, which includes a couple changes from the original lineup, in the interests of pure originality:

We'll be giving away t-shirts and so on at the event, and there will be brewery folks and beer specials. So re-save the date.
Posted by J-C. G. Rauschenberg at 1:09 AM No comments:

Possibly the best-reviewed title of the year, Joseph O'Neill's
bestselling new novel, NETHERLAND, was praised by New Yorker critic
James Wood as "exquisitely written . . . and one of the most
remarkable post-colonial books I have ever read" and by the New York
Times' fearsome Michiko Kakutani as a "stunning" and "resonant
meditation on the American dream." O'Neill's previous novels include
THE BREEZES and THIS IS THE LIFE. His family history, BLOOD-DARK
TRACK, was a New York Times Notable Book for 2002 and a book of the
year for The Economist and The Irish Times. O'Neill contributes
regularly to The Atlantic Monthly.

Hari Kunzru's novel of the 1960s, MY REVOLUTIONS, "offers a historical
portrait of London that must be unparalleled in contemporary British
fiction," in the words of James Wood. Kunzru's previous books -
TRANSMISSION, THE IMPRESSIONIST and the story collection NOISE -
earned him a place on Granta's "Best of the Young British Novelists"
list. Kunzru is Deputy President of English PEN and is currently a
fellow of the Cullman Center for Scholars and Writers at the New York
Public Library.
Posted by J-C. G. Rauschenberg at 10:47 PM No comments:

During the months of December and January, we'll be doing an Iron Santa Challenge to encourage people to try our excellent selection of winter seasonal beers. The challenge: drink a 16-ounce pint (or 12-ounce pint, depending on how we're serving a given beer) of six different winter beers in one day/night, and win a free Pacific Standard t-shirt and everlasting glory. The actual beers will change with our rotating tap selections, but will generally include beers like the Sierra Celebration, Anchor Christmas, Young's Chocolate Stout, and so on. Starting December 1, ask your bartender if you're interested in taking the challenge, and they'll provide you with a checklist of beers to drink over the course of an evening. Oh, and pace yourself. We don't want any messes.
Posted by J-C. G. Rauschenberg at 8:26 PM No comments:

Our second Fancy-Pants Big-Money Quiz Night will be Sunday, December 7. Each team member will pay in $10, so several hundred dollars will likely be at stake. The winning team will receive 75% of the pot, and the second-place team 25% (I think last time that meant roughly $500 for the winner, and $170 for second place). We also reserve the right to randomly distribute other prizes in the form of Pacific Standard schwag. All teams are encouraged to dress up to make it an enchanted evening by the Gowanus.

Teams who don't want to pay in can still play along and earn points towards the pub quiz playoffs, but they won't be eligible for the pot, of course.
Posted by J-C. G. Rauschenberg at 6:32 PM No comments:

Cal, sadly, lost to Oregon State in Corvallis last weekend, but we still have the chance to finish the season out respectably and get a nice bowl bid by beating Stanfurd on Saturday, and Washington afterwards. Any Bear fan worth his or her salt should be out to watch Big Game here on Saturday, when we will try to reclaim the Axe from the shifty-eyed, thieving bourgeoisie who inhabit The Leland Stanford Junior Farm. The usual giveaways and specials shall apply, though the unique pleasure of beating Stanfurd is like nothing else. As we often say, no Cal season can be called a true success unless Stanfurd is humiliated.
Posted by J-C. G. Rauschenberg at 5:43 PM No comments:

We've managed to get our hands on twelve bottles of Blind Pig, a multiple-award-winning, classic West Coast IPA from the ever-elusive Russian River brewery. Come here right away, because these will go fast. As usual, the price is high, because we had to give our first-born children to get it, but it's definitely worth it (and you can share with a friend if you want). Description below:

Patrick Rosal is the author of two full-length poetry collections, UPROCK HEADSPIN SCRAMBLE AND DIVE, which won the Members' Choice Award from the Asian American Writers' Workshop, and most recently MY AMERICAN KUNDIMAN, which won the Association of Asian American Studies 2006 Book Award in Poetry as well as the 2007 Global Filipino Literary Award. His poems and essays have been published widely in journals and anthologies including Harvard Review, American Review, The Literary Review, Brevity, The Beacon Best, and Language for a New Century. He has twice served on the faculty of Kundiman and has been a visiting writer at Penn State Altoona, Centre College and most recently the University of Texas, Austin.

Matthew Dickman is the author of ALL-AMERICAN POEM (APR, 2008), winner of the APR/Honickman First Book Prize, and two chapbooks, AMIGOS (Q Ave Press, 2007) and SOMETHING ABOUT A BLACK SCARF (Azul Press, 2008). His poems have appeared in The New Yorker, Missouri Review, Tin House, Boston Review, Lyric, and American Poetry Review. He has been the recipient of fellowships from the Michener Center for Writers at the University of Texas at Austin, The Vermont Studio Center, and the Fine Arts Works Center in Provincetown. He is from Portland, Oregon.

Bianca Stone was born in Vermont in a family of writers and grew up down the road from Robert Frost's cabin. She currently lives in New York City where she is an MFA candidate at NYU's Creative Writing Program in Poetry. She is also a freelance illustrator and cartoonist of sorts. She has been published in Vermont Life, Two Review, and The Patterson Literary Review.
Posted by J-C. G. Rauschenberg at 4:47 PM No comments:

On December 3, we'll be celebrating the release of Brooklyn writer Jaime Lowe's Digging for Dirt: The Life and Death of ODB with a reading and party. The book sounds fascinating, so you should come listen to Jaime talk about it and read from it. The official release:

In a compelling combination of personal narrative, biography, and cultural criticism, Digging for Dirt explores ODB’s life, career, mythology, and death by following the troubled trajectory of his public and private worlds. Jaime Lowe met with the people ODB affected and was most affected by—surviving members of the Wu-Tang Clan, other hip-hop contemporaries, his parents, followers, managers, neighbors, and friends—in an attempt to figure out the man behind the clown-prince persona and to dissect the issues of race, celebrity, mental illness, and exploitation that surrounded his rise and fall.

Jaime Lowe’s writing has appeared in The Village Voice, Interview, Radar, and Sports Illustrated.
Posted by J-C. G. Rauschenberg at 7:10 PM No comments:

Please stop by Wednesday, November 12th to drink for a great cause. All drink proceeds from 7:00 - 8:00 pm will be donated to help enable a local Brooklynite to volunteer in Cambodia at a grass-roots organization focused on post-conflict reconciliation.
Posted by J-C. G. Rauschenberg at 9:29 PM No comments: 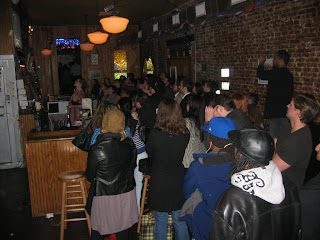 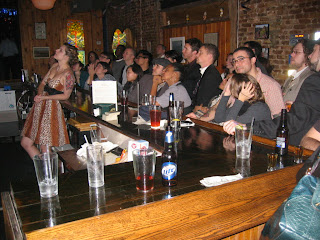 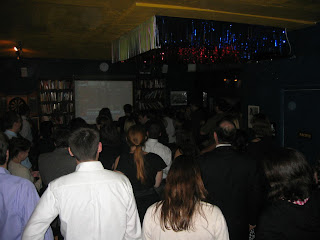 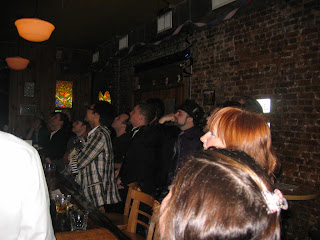 We all had a great time--thanks to all who came and made it a cathartic, joyous event. (And sorry to all whom I picked up and carried around in my ecstasy.) The evidence, Part I: 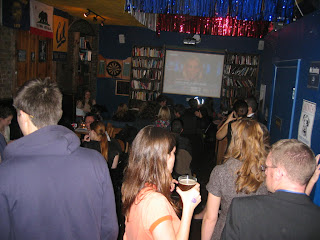 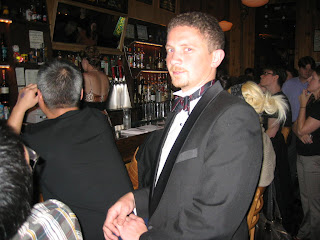 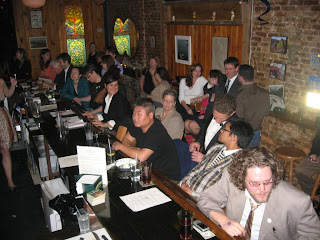 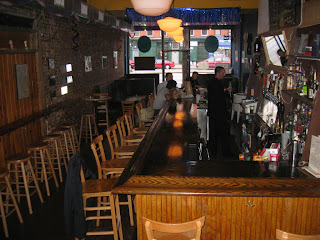 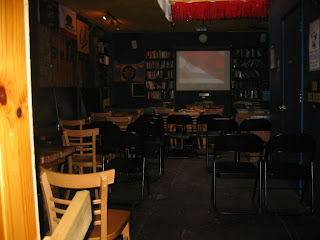 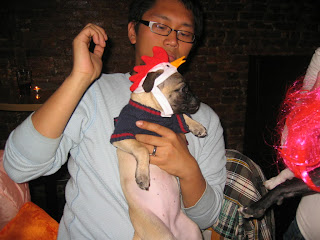 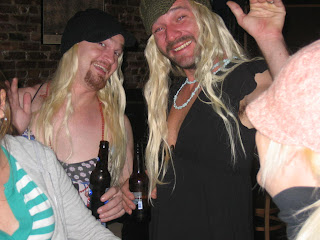