Sorry for the delay in judging the lovely mix CDs--we're busy people, and don't have too much time to sit down and give our full attention to the music. We promise to get the judging done in another week or two. So, thanks for your submissions, and hang on.
Posted by J-C. G. Rauschenberg at 8:34 PM No comments:

In Case You Haven't Heard

Madame Fuzzybottoms is at a good foster home with our bartender/barback Ray, who has supervised kitty births before. According to Ray, she's looking massive and regal and ready to give birth. We've started an informal pool on when she'll emit new cats onto our planet and how numerous these creatures will be; ask a bartender if you're interested. Below are a few pictures. Be assured we'll keep you updated. 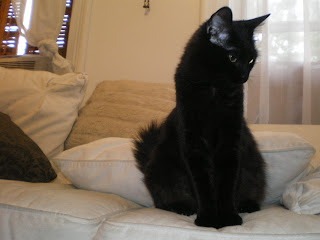 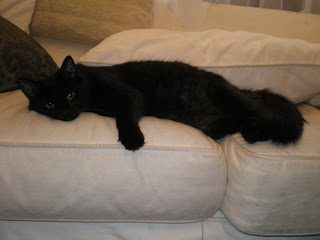 We've just gotten a sweet collection of West Coast bottles, from phenomenal microbreweries like Deschutes, AleSmith, Midnight Sun (Alaska!), and Ninkasi, that don't distribute kegs out here. The list is below. You'll see they're pricey, but that's how it has to be, due to their rarity and big shipping costs. In return for the few extra dollars, you get some of the best beer in America, and the gloating knowledge that you're consuming one of the few bottles from these breweries to make it out to the East Coast. Come in and enjoy.

Sorry, cheese fans, Sean (the wonderful Artisanal cheese buyer who runs our beer and cheese night) had a last-minute emergency and can't come by with the cheese tomorrow. We'll reschedule it, obviously, and will let you know as soon as we pick a date and time. Sorry to fake the funk.
Posted by J-C. G. Rauschenberg at 5:08 PM No comments:

After a hiatus of a couple months while Jeremy was busy, he's bringing back a fearsome comedy posse this Wednesday. If you haven't been to comedy night, you really should--it's, like, funny. Here's the lineup, with Jeremy's notes:

So: Stone, a San Diego microbrewery that we hope you'll agree is one of the best in America (you must have had some of their awesome beer at the Standard, right? If not, try the awesome Ruination IPA, which we have on tap right now), is having a massive 9-bar, 3-day beer event in New York City from June 17-19.

Here's how it will work: each day, there will be a unique Stone beer, often a cellared pick that hasn't been available on the East Coast, or almost anywhere, at each of three bars. In addition, every bar will be introducing Stone's Levitation, a great beer with a big hoppy character and citric overtones, but a relatively low alcohol content. In addition, the Stone head brewer will be visiting each bar to talk to anyone interested in Stone or beer in general.

Pacific Standard is slotted for June 18 from 5-7 pm; at that time, we'll launch the Levitation and the Stone 10th Anniversary IPA, a beer that's been virtually unavailable on tap since it was introduced in summer 2006. We hear it's mind-blowing. We'll also have the aforementioned head brewer, and the usual fun stuff, specials, and giveaways. If you can't make it during 5-7, try to get here at some point that night--we'll be pouring both kegs until they run out, so you'll probably be able to try them.

In any case, we really recommend that you make this event, and the Stone events at the 8 other bars--it's really a once-in-several-years kind of thing to have a prestigious West Coast brewery out here in such force. Prepare your palettes and Metrocards, faithful beer nerds.
Posted by J-C. G. Rauschenberg at 5:02 PM No comments:

We've just scheduled a Sierra Nevada beerfest for June 12 at 7 pm. We'll have at least six Sierra beers on tap, including some awesome ones not often seen in these parts, as well as all kinds of free Sierra merchandise available.

Located on Fourth Avenue in Brooklyn, near the Atlantic/Pacific
station, Pacific Standard is a literary bar serving up over a dozen
West Coast microbrews on tap (as well as choice selections from small
and local breweries), a fine collection of wines, and tasty cheeses
and meats.

Eamon Grennan's new volume of poetry, MATTER OF FACT, will be released
in May by Greywolf Press. He is the author of seven other volumes of
poetry, including THE QUICK OF IT, RELATIONS: NEW & SELECTED POEMS,
and STILL LIFE WITH WATERFALL, which was awarded the 2003 Lenore
Marshall Poetry Prize. His collection of translations, LEOPARDI:
SELECTED POEMS, won the 1997 PEN Translation Award for Poetry. Grennan
has been the recipient of fellowships from the National Endowment for
the Arts and the Guggenheim Foundation, and he has taught at numerous
universities, including New York University, Columbia University, and
Villanova University. He lives in Poughkeepsie, New York, where he has
been a longtime member of the English Department at Vassar College,
and divides his time between there and the west of Ireland.

Patrick Phillips' second book, BOY, was published by the University of
Georgia Press in March 2008. His first collection, CHATTAHOOCHEE, was
chosen by Robert Pinsky, Alice Quinn, and Robert Wrigley for the 2005
Kate Tufts Discovery Award. He has received support from Yaddo,
MacDowell, and the Bread Loaf Writers' Conference, and was a Fulbright
Fellow at the University of Copenhagen. He teaches at Drew University,
and lives in Brooklyn, New York.

Ciaran Berry's first collection of poems, THE SPHERE OF BIRDS, was
released this spring in North America by Southern Illinois State
University Press (as the winner of the Crab Orchard Series in Poetry
Open Competition) and in Ireland by Gallery Press. Berry teaches in
the Expository Writing Program at New York University, where he
received his Master of Fine Arts degree and was awarded a New York
Times fellowship. His work has appeared in AGNI, The Threepenny
Review, Green Mountains Review, Missouri Review, and Notre Dame
Review. A recent recipient of a Pushcart Prize, his work will appear
in THE BEST AMERICAN POETRY 2008. He is from the northwest of Ireland.
Posted by J-C. G. Rauschenberg at 9:53 PM No comments:

Next Week: End-of-Season Fiction Night Extravaganza with Arthur Phillips and Douglas A. Martin

Arthur Phillips' third novel, ANGELICA, was, like PRAGUE and THE
EGYPTOLOGIST, a national bestseller. The Washington Post, which named
it one of the best novels of 2007, wrote, "[ANGELICA] cements this
young novelist's reputation as one of the best writers in America, a
storyteller who combines Nabokovian wit and subtlety with a narrative
urgency that rivals Stephen King's." Phillips, a five-time Jeopardy!
champion and winner of the Los Angeles Times/Art Seidenbaum Award for
best first novel, has been translated into 25 languages.

"ANGELICA impresses first as a clever send-up of the late Victorian
novel, and then becomes its own very original thing. It is engrossing,
deeply moving, and - precisely because it is moving - very
frightening." -Stephen King

Douglas A. Martin's second novel, BRANWELL, was hailed as "a cohesive
and convincing portrait of the lost, forgotten Brontë" by The Austin
Chronicle. "Stylistically complex and emotionally evocative," Darcy
Steinke wrote. "Branwell Brontë emerges as ...both muse and devil to
his sisters' passions, giving us a new dimension to this ever
fascinating family." Martin's first novel, OUTLINE OF MY LOVER, was
named an International Book of the Year in the Times Literary
Supplement, and was adapted for the Forsythe Company's multimedia
production "Kammer/Kammer." Martin, an award-winning poet and critic,
is also the author of THEY CHANGE THE SUBJECT and, with Michael Stipe,
Grant Lee Phillips, and others, THE HAIKU YEAR.

Host Garth Risk Hallberg is the author of A FIELD GUIDE TO THE NORTH
AMERICAN FAMILY. The Pacific Standard Fiction Series aims to showcase
the intense and varied literary energies of Brooklyn by pairing
writers from the borough and beyond. We offer fine stories and
appealing beverages in a civilized setting. For more information,
please visit www.pacificstandardbrooklyn.com.
Posted by J-C. G. Rauschenberg at 9:46 PM No comments:

Another Reading Next Week

Chris Martin and some visitors from the Midwest are reading poetry on Wednesday. To wit:

We're So Googlable, We Might Even Break Google and You'd Need a New Fancy Google to Google Us.

For a long time, we were second banana in the Google world to the Pacific Standard time zone. Anyone looking for our bar would have to look one, perhaps two inches down the Google search results list, past that pesky, informative entry about the time zone, and sometimes past Standard Pacific Homes. But google "Pacific Standard" today and you will see we have triumphed! A silly time zone is obviously less important than us, and now all the world can see it. Who needs time when you have microbrews?
Posted by J-C. G. Rauschenberg at 2:35 PM No comments:

A couple quick notes about the Frequent Drinker Program (which now has 114 members!):

--We have your Frequent Drinker ID numbers on stickers, which we can put on the back of your card so you can easily remember your number and check your yards online. Ask a bartender to get your sticker.

--I'm generally updating yardage totals on Tuesday afternoons. As I've mentioned before, if you've gotten your ID number from us, you can get your yards here:

May you gain yards like running backs, our sweet customers.
Posted by J-C. G. Rauschenberg at 4:51 PM No comments:

according to the nice folks at Hope Veterinary Clinic, where we had her checked out (ultrasound, blood tests, tires rotated, etc.). We're close to finding Madame her new home, but if you're interested in one of her kittens a month or two down the road, let us know. Here's a picture of Fuzzybottoms sleeping on the Oxford English Dictionary during pub quiz. She's as nerdy as our customers. 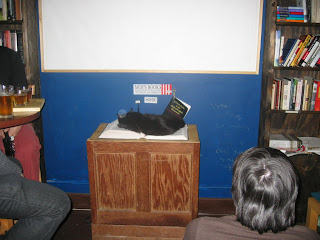