This just in: for just 100 Frequent Drinker Yards, you can get a consultation with a fantastic Brooklyn dog training service:

Don't let your pooch spoil your drinking! For 100 yards get a
personal dog training consultation with Brooklyn's Top Dog Service,
LLC. Call David at 917-749-5756 and he'll teach you and your dog what
you need to know so you don't get kicked out of your favorite watering
hole or dog park for offensive doggie behavior.

They're passionate about training all types of dogs, so if you're looking for a new way to spend your yards, let a bartender or a Jo(h)n know.
Posted by J-C. G. Rauschenberg at 7:47 PM 1 comment:

Tryfon Tolides was born in Korifi Voiou, Greece. His first book, An
Almost Pure Empty Walking, was a 2005 National Poetry Series Selection
and published by Penguin in 2006. In 2009, he received a Lannan
Foundation Residency in Marfa, Texas.

Leslie C. Chang is the author of the poetry collection, Things That No
Longer Delight Me, selected by Cornelius Eady for the 2008-2009 Poets
Out Loud Prize and published by Fordham University Press in 2010. She
has received awards and scholarships from the Academy of American
Poets, the Millay Colony for the Arts, and the Bread Loaf Writers'
Conference. Her work has appeared in Agni, The American Poetry Review,
The Iowa Review, Literary Imagination, and other publications. She
lives in New York City with her husband and daughter.

Eric Weinstein is the winner of the 2010 New Michigan Press/DIAGRAM
chapbook contest for his collection, Vivisection. His poetry has
recently appeared or is forthcoming in Best New Poets 2009, Cincinnati
Review, Colorado Review, and Third Coast. He is an MFA candidate at
New York University.
Posted by J-C. G. Rauschenberg at 5:43 PM No comments:

FYI, our big Craft Beer Week Bear Republic event, with the brewers (for the first time ever in NYC!), cheese pairings, specials, and giveaways, just moved from Wednesday the 29th to Thursday, September 30, starting at 7 pm. You should definitely be here. (Plus, on Thursday, as during the rest of Craft Beer Week, we feature a Bear Republic beer for $3 for Passport holders).
Posted by J-C. G. Rauschenberg at 4:19 PM 2 comments:

but we're going to have a mead/beer tasting here on Friday from 4:30-6:30 pm to celebrate the start of Craft Beer Week 2010. Save the time for now--there should be some really interesting mead and mead/beer mixtures from the folks at Coney Island.
Posted by J-C. G. Rauschenberg at 6:21 PM No comments:

who made it out to our party. It was a glorious conglomeration of all our favorite people. Below are a few pictures we took. We kicked two kegs of our Missionary Style IPA, but more are on their way; they should be here by Monday of next week. 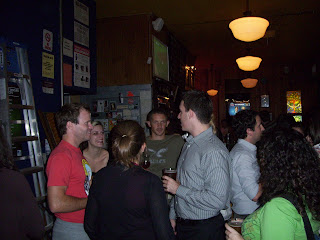 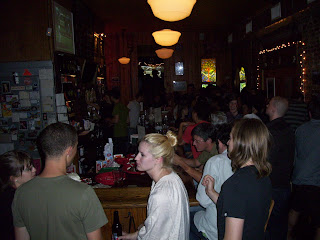 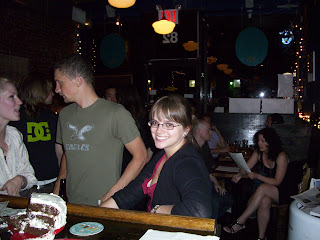 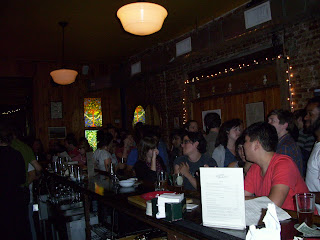 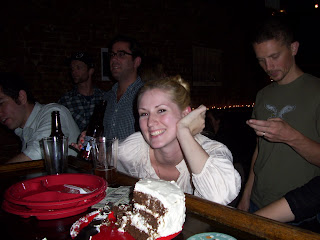 The Standard Issues returns for its third installment! This time the topic is FIGHTS! The following people will be throwing down on our stage! It will be like very sexy jello wrestling only with words and clothes.

with your host: Brad That Is A Gun In My Pocket Lawrence

And a mystery guest drawn from the hat.
Posted by J-C. G. Rauschenberg at 7:30 PM No comments:

We now have passports for New York City's Craft Beer Week 2010, which will run from September 24-October 3, and include many exciting events. More info is available on their website here:

The Passports are only $10 this year, and entitle you to a $3 pint of craft beer at basically every good beer bar in the city (including, of course, Pacific Standard). Plus, the Passport has specials and benefits that extend for an entire year, making it definitely worth the price. Come by and purchase one from your friendly bartender. Also, ask them about the official Craft Beer Week t-shirt; we have a very limited number of them for sale for $10, in medium-large sizes, while supplies last.
Posted by J-C. G. Rauschenberg at 2:42 PM No comments:

Yet further details on our birthday event September 14.

Here are the awesome beers from Sixpoint we'll have on our 3rd birthday (observed) September 14:

Overall, we'll have 12 Sixpoint beers on draft and 2 Sixpoint beers on cask, for a whopping 14 tasty quaffs from Brooklyn. We'll also have special Sixpoint/Pacific Standard mashup pint glasses which we'll be giving away (more details on that soon). This is probably the most essential night to be at Pacific Standard in our 1000+ days of being open; we hope to have a beer with you Tuesday!
Posted by J-C. G. Rauschenberg at 6:46 PM No comments:

From a simple radioactive decay, from Carbon-14 to Nitrogen-14, comes the discovery of the age of Egyptian Mummies and ancient hominids, the tracking of key data on climate change, and religious controversy and heartache. Join The Story Collider for five tales of Carbon Dating, 8pm September 15 at Pacific Standard.

The Story Collider brings together lobbyists, researchers, musicians, and other disreputable types to tell us personal stories about the times when, for good or ill, science happened.

Hosted by Ben Lillie and Brian Wecht
Posted by J-C. G. Rauschenberg at 6:05 PM No comments:

Phillis Levin is the author of four volumes of poetry, Temples and Fields, The Afterimage, Mercury, and May Day. She is the editor of The Penguin Book of the Sonnet. Her many honors include the Poetry Society of America’s Norma Farber First Book Award, a Fulbright Scholar Award to Slovenia, the Amy Lowell Poetry Travelling Scholarship, and fellowships from the Guggenheim Foundation and the National Endowment for the Arts. She is a professor of English and the poet-in-residence at Hofstra University and lives in New York.

Oliver de la Paz is the author of three collections of poetry, Names Above Houses, Furious Lullaby (SIU Press 2001, 2007), and the forthcoming Requiem for the Orchard (U. of Akron Press 2010), winner of the Akron Prize for poetry chosen by Martìn Espada. He co-chairs the advisory board of Kundiman, a not-for-profit organization dedicated to the promotion of Asian American Poetry. A recipient of a NYFA Fellowship Award and a GAP Grant from Artist Trust, his work has appeared in journals like Virginia Quarterly Review, North American Review, Tin House, Chattahoochee Review, and in anthologies such as Asian American Poetry: The Next Generation. He teaches at Western Washington University.

John Murillo is the author of the poetry collection, Up Jump the Boogie. A graduate of New York University's MFA program in creative writing, he has received fellowships from Cave Canem, the New York Times, the Wisconsin Institute for Creative Writing, and the Fine Arts Work Center in Provincetown, Massachusetts. His work has appeared in such publications as Callaloo, Court Green, Ninth Letter, and Ploughshares, and is forthcoming in Angles of Ascent: a Norton Anthology of African-American Poetry. Currently, he is visiting assistant professor of creative writing at Cornell University.
Posted by J-C. G. Rauschenberg at 4:30 PM No comments: