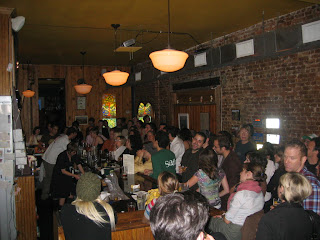 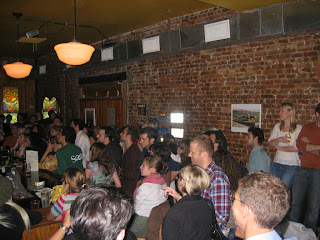 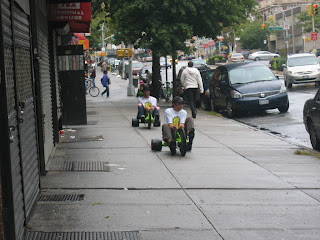 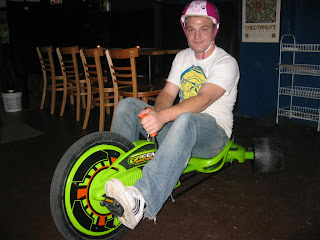 Next Debate Watch Party on Thursday.

Our first debate watch party was NUTS (think tons of people, Brazilian television crew, Swiss radio journalist), but at least we were prepared for the possibility, and employed our buddy/amateur doorperson Mike to keep us from being overcrowded. (And we thought debates were too wonky to attract such big crowds.) Sorry to anyone who couldn't get in, but fire codes being, umm, fire codes, our hands are tied. The lesson here for you folks is to get here EARLY if you want to get seats/space and watch the debates. You're probably not going to be able to waltz in half an hour before the debate starts.

Anyway, the next one will be Thursday at 9 pm, between Sarah Palin and Joe Biden. This vice presidential debate is one of the most anticipated of the season, and should be a wild time. We'll have the usual specials and raucous crowd--be there and be square. Because honestly we could fit more people if you all were square instead of cylindrically shaped.
Posted by J-C. G. Rauschenberg at 10:10 PM No comments:

I don't know how we did it (which gives me plausible deniability, I guess), but we got our hands on a very limited amount of Russian River's Pliny the Elder, perhaps the best double IPA in existence, as evidenced by its gold medals at the Great American Beer Festival and World Beer Cup. It's brewed as a tribute to Pliny, who first identified hops and gave them their scientific name before meeting a fiery death when Mount Vesuvius erupted. We have to charge $12 for a 16-ounce bottle, because it was so damn costly to get ahold of them, but what's a few extra bucks when you can honor a great and rarely-seen-on-the-East-Coast California brewery and a great man? Come hastily, before we run out.
Posted by J-C. G. Rauschenberg at 6:40 PM 1 comment:

Books available on-site!
Drink specials to be chosen by dartboard!
"Best New Literary Event of 2008" (New York Magazine)...now with
stylish new curtains!
Paul Beatty, author of SLUMBERLAND, has been hailed by The New York
Times and The Los Angeles Times as one of the best writers of his
generation. His previous novels are TUFF ("Unforgettable" - The Boston
Globe) and THE WHITE-BOY SHUFFLE ("Laugh-out-loud funny and
weep-in-silence sad" - The Nation). A former Grand Poetry Slam
Champion of the Nuyorican Poets Cafe, Beatty is also the author of the
poetry collections JOKER, JOKER, DEUCE and BIG BANK TAKE LITTLE BANK,
and is the editor of HOKUM, an anthology of African-American humor.

"Furiously written… [SLUMBERLAND] is another bravura performance from
the searingly talented Paul Beatty. A no-holds-barred comedic romp
that crushes through the Fulda Gap of Black/White, East/West
relationships like an M1 tank." -Junot Diaz

Matthew Sharpe's third novel, JAMESTOWN, was one of Publisher's
Weekly's Best Books of 2007 - "a work of hectic brilliance and immense
sadness," according to Salon.com. His previous novel, THE SLEEPING
FATHER, was a Today Show Book Club pick, and has been translated into
nine languages. Mr. Sharpe's previous books are the novel NOTHING IS
TERRIBLE and the collection STORIES FROM THE TUBE. His stories and
essays have appeared in Harper's, McSweeney's, and Bomb, among others.

"[A]n absurd hybrid of Cormac McCarthy's The Road and Walt Disney's
Pocahontas... JAMESTOWN is an anguished lament for the whole bloody
history of Western conquest, the stupidity and cruelty of invaders
then and now... Jamestown is packed with marvelous material, moving
and funny and deeply provocative." - Washington Post Book World

Host Garth Risk Hallberg is the author of A FIELD GUIDE TO THE NORTH
AMERICAN FAMILY and is a 2008 NYFA fellow in fiction. The Pacific
Standard Fiction Series aims to showcase the intense and varied
literary energies of Brooklyn by pairing writers from the borough and
beyond. We offer fine stories and appealing beverages in a civilized
setting. For more information, please visit
www.pacificstandardbrooklyn.com.
Posted by J-C. G. Rauschenberg at 5:47 PM No comments:

Another great poetry lineup on October 9.

Located on Fourth Avenue in Brooklyn, near the Atlantic/Pacific station, Pacific Standard is a literary bar serving up over a dozen West Coast microbrews on tap (as well as choice selections from small and local breweries), a fine collection of wines, and tasty cheeses and meats.

D. Nurkse is the author of THE BORDER KINGDOM (Knopf 2008) and eight previous books of poetry. He has received a Guggenheim Fellowship, the Whiting Writers’ Award, two National Endowment for the Arts fellowships, two grants from the New York Foundation for the Arts, a Tanne Foundation award, and two awards from Poetry magazine. He has also written widely on human rights. He teaches at Sarah Lawrence College and lives in Brooklyn.

Nathaniel Bellows is the author of a collection of poems, WHY SPEAK? (W.W.Norton 2007/2008), and a novel, ON THIS DAY (HarperCollins 2003/2004; Harmon Blunt Publishers 2006). His poems have appeared in The New York Times Book Review, The New Republic, The Paris Review, and many other journals. His fiction has has appeared in The Paris Review, Post Road, Redivider, and THE BEST AMERICAN SHORT STORIES 2005, edited by Michael Chabon.

Marcus Jackson’s poetry has appeared in such publications as The New Yorker, Blood Lotus, Cave Canem Anthology 2007, Evansville Review, Heliotrope, The New Delta Review and Toledo Review. He received his BA from the University of Toledo and his MFA from New York University. He lives in New York City, where he has worked as a mover, a mailroom clerk and an adjunct lecturer. He is finishing his first collection of poems, entitled NEIGHBORHOOD REGISTER.
Posted by J-C. G. Rauschenberg at 5:45 PM No comments:

We'll be having debate-watching parties for all the debates: September 26, October 2 (vice-presidential), October 7, and October 15. Starting at 8 pm, we'll have beer specials, and we'll watch the actual debates on our big projection screens starting at 9 pm each of those nights. No need to RSVP; just show up early because it'll be first-come first-served as far as seating goes. (But we won't be nearly as crazy as the convention speech night, I think!).
Posted by J-C. G. Rauschenberg at 4:47 PM 5 comments:

To avoid the kind of overcrowding we had for Barack Obama's convention speech, we've decided to sell tickets in advance for election night, which is Tuesday, November 4. We'll limit the total number of tickets sold, and close the bar to non-ticketed people on the night of the event, so we won't be overwhelmed by the masses. Each ticket will cost $10, but will include a free beer, so it's not a bad deal at all. Plus, we'll have all kinds of Election Night specials and giveaways. A cathartic, transcendent good time, or an angry, drunken, this-country-is-going-to-hell good time, is guaranteed for all. You can buy these tickets starting tomorrow at Pacific Standard--just ask a bartender.
Posted by J-C. G. Rauschenberg at 7:29 PM 3 comments:

we now have a collection of fine Pacific Standard logo pint glasses. To wit: 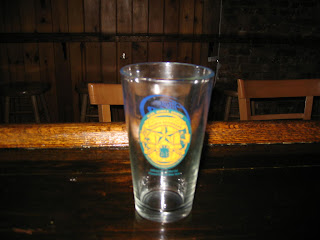 We're selling them for $5 a piece, and giving them away at various events (pub quizzes, Cal games, and so on).
Posted by J-C. G. Rauschenberg at 12:53 AM 2 comments:

was a disappointment (in more ways than one: Jon and I sunburned the crap out of ourselves on a day that was supposed to be overcast with a chance of showers), true Bears are far too sturdy to let a silly out-of-conference early-season loss faze us. we shall reconvene on September 27 to watch Cal play Colorado State in Berkeley (thank God). T-shirts and pint glasses will be given away for said game, as well as cheap pitchers and beer buckets. Going into conference play at 3-1 would be a fine thing. See you then!
Posted by J-C. G. Rauschenberg at 12:51 AM No comments:

to buy some tickets for the first-ever Craft Beer Week, which continues Monday-Sunday this week. They're still available, are a great deal, and are a lovely and important way to support craft beer in general, and this excellent event in the future. Go to this site:

and have some fun crawling bars in neighborhoods you don't know. Or ones you do know. Either way.
Posted by J-C. G. Rauschenberg at 3:20 AM No comments:

Just a quick note to let you all know that Ithaca Ten is now on tap. It's, to say the least, extremely rare to see this beer on tap in New York City, so get yourself down here before our very limited supply runs out. (It's ridiculously good.)
Posted by J-C. G. Rauschenberg at 9:12 PM 1 comment:

At 6:30 pm, join us in the back room for our first conference game, against Washington State. We'll have real TV this time, plus all the usual bucket and pitcher specials. See you there--if we get through this one, our chances look good of going into the meat of our schedule with a 4-0 record.
Posted by J-C. G. Rauschenberg at 9:25 PM 1 comment:

Live photos from the first anniversary.

including one where Jon Stan shows off his talent for looking impossibly evil. 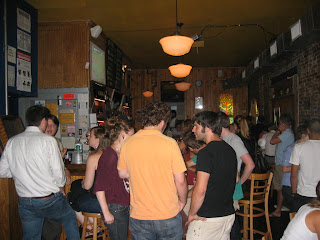 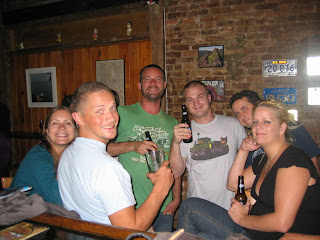 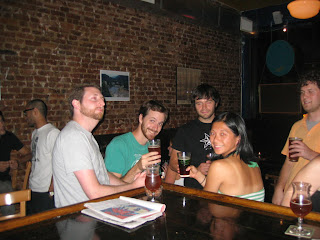 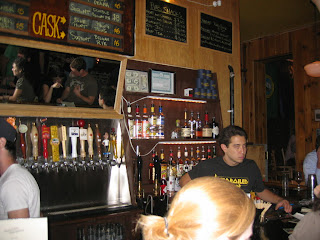 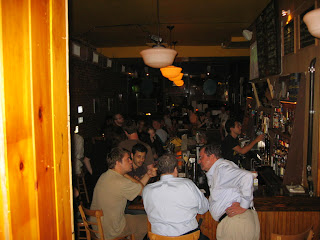 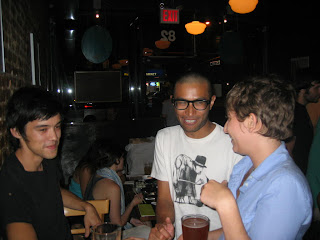 Hi, everyone, from our first anniversary! Everyone is here and it is fun! We are debuting Sixpoint's Double Belgian IPA, which is tasty! Photos to come!
Posted by J-C. G. Rauschenberg at 9:11 PM No comments: